Picking up the conversation from a slightly different topic (charged-for-failed-transactions/15016),

At the bottom of this post is a screenshot of the transaction data error message I received on all 5 of my failed purchases. This resulted in over $200 of lost money due to gas fee payments. The failed transactions could have easily been avoided if there weren’t the following two problems with the user interface:

Has anyone else had this problem? I’ve seen users that have had “Out of gas” error messages. How do I get compensated from Metamask? 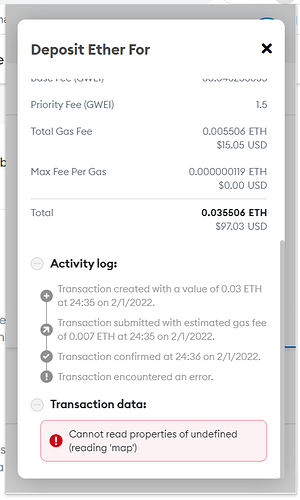 Hey @Webstar, sorry to hear about the issues with failed transactions and gas.

Thank you for bringing this up, at the current time users can go to a block explorer like etherscan.com to see why their transaction has failed, but it would definitely be helpful if the error feedback was also displayed on the MetaMask UI. I’ll bring this up to the team.

To answer your second question, gas prices fluctuate and can be very volatile, which causes the warning to appear at varying times depending on the current gas prices.

This topic was automatically closed after 30 days. New replies are no longer allowed.