Hi, I could really use some help I had a transaction drop on the 28th since then I’ve been trying to figure out what happened and where all my ETH has gone as the transaction that dropped took it all. Can someone please help me out with this??

Same here! It says that the transaction was success when checking through MetaMask, but it was dropped when checking via OpenSea. The ETHs are gone. Still waiting for reponse on my inquiry.

Hey @HulkSmash if this was a failed transaction, the ETH for the gas fees are still paid. Here is more information on our Knowledge Base:

Why did I pay gas fees for a failed transaction?

This is not a fee that MetaMask receives so we cannot refund it. This fee is paid to miners or validators for finalizing transactions, validating them into blocks, and securing the blockchain. Th...

It’s not a failed transaction though it says dropped not failed can you explain that please?

Not sure what you mean by dropped, transactions can either be failed, pending, or successful. Would you be able to send the transaction hash?

Hi, what it says on the metamask extension is dropped

My mistake, it does say dropped, first time I’m seeing something like this

As stated in the article on the Knowledge Base I linked above, you still pay the gas fees for these transactions.

I did read this and understand that but the transaction has been dropped taken all the ETH and not replaced the transaction its just dropped it. No ETH returned and no NFT’s on Opensea 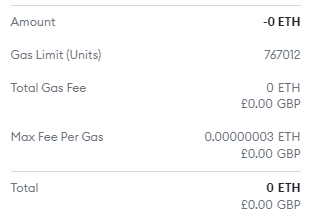 The ETH has not returned to your wallet because the transaction has been dropped AND replaced, meaning that there was another successful transaction. You can see it here

Oh so the transaction has gone through and taken a lot of gas fee’s with it, then why didn’t I get the NFT’s that I brought for that ETH? I’m still confused

I think it is likely that you may be getting some of your transaction activity mixed up. The dropped and replaced transaction was a direct transfer of ETH to another wallet address.

There has been a failed transaction of what looks like the OpenSea transaction you are referring to, which maybe the cause of some confusion?

But I have the dropped transaction saying OpenSea too?

Ah, ok I see, thanks for clarifying. I’m not sure why the replaced transaction did not interact with OpenSea then

If you would like, you can submit a ticket to the support team at https://metamask.zendesk.com/hc/en-us and click Start a conversation

This topic was automatically closed after 30 days. New replies are no longer allowed.